As of today, the CPLD is a solved-problem. All the design goals detailed in my prior post are satisfied and have been tested up-to ~5MHz input clock.

On to the software battles...

My first priority is to streamline the firmware's treatment of the STM32F7 hardware to eliminate the need for the constant transfer intervention that the prototype glove needed to keep bytes moving. Once that is done, I can jack up the clock rate and validate the CPLD at full speed.

This is the only reason I am not posting detailed statistics today. 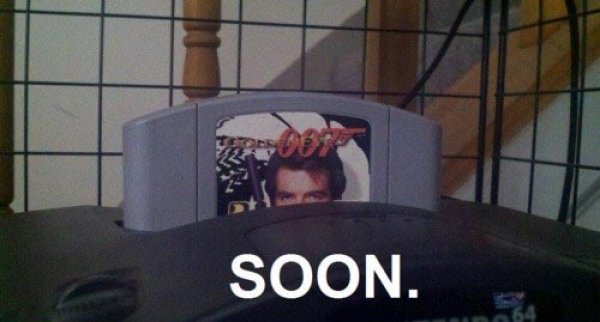 I have no reason to believe that the design won't scale to a 20MHz input clock, but I have to actually see it to believe it.

There is also an untested internal register that is concerned with digit-level power saving, but it isn't important to overall function, and I have no reason to believe it will not work.

What follows is the sum of posts, notes, and slack reports over the course of the last month related to this task.

Much-needed condensation of constants and debug methods pertaining to bus transactions. I am due to write up a new blog post. But until then, here is my informal log of compile sizes over the course of last night. GCC was given -O2 for each build.

[4:19 AM] jspark311 Ok... much cruftiness was lost. r1 simplified the firmware dramatically.

Now that the bus-ops are contained for the moment, I can turn my attention to the the god-awful SPIDeviceWithRegisters class (which I am about to rip out and shit-can for good).

No longer required to deal with the heterogeneous bus topology of r0.

And the firmware running on the new r1 board....

That's all of the drivers. The first 6 are nearly complete, and the PMU (power-management unit) can do some basic clock-scaling. The largest remaining task is direct hardware support.

jspark311: I can potentially make you an emulator in firmware now. lol

drquinn: woah, woudn't a firmware emulator be the actual glove?

drquinn: nice! can't wait to see where its at

jspark311: I have TCP, UDP, MQTT support in ManuvrOS now, so you could just connect with the browser.

drquinn: so you'd just have to snap on some TCP connector to the glove?

jspark311: No hardware involved... the firmware experiences a TCP socket in the same way as it does a bluetooth connection. So when the time comes, we just drop one transport class in for the other. 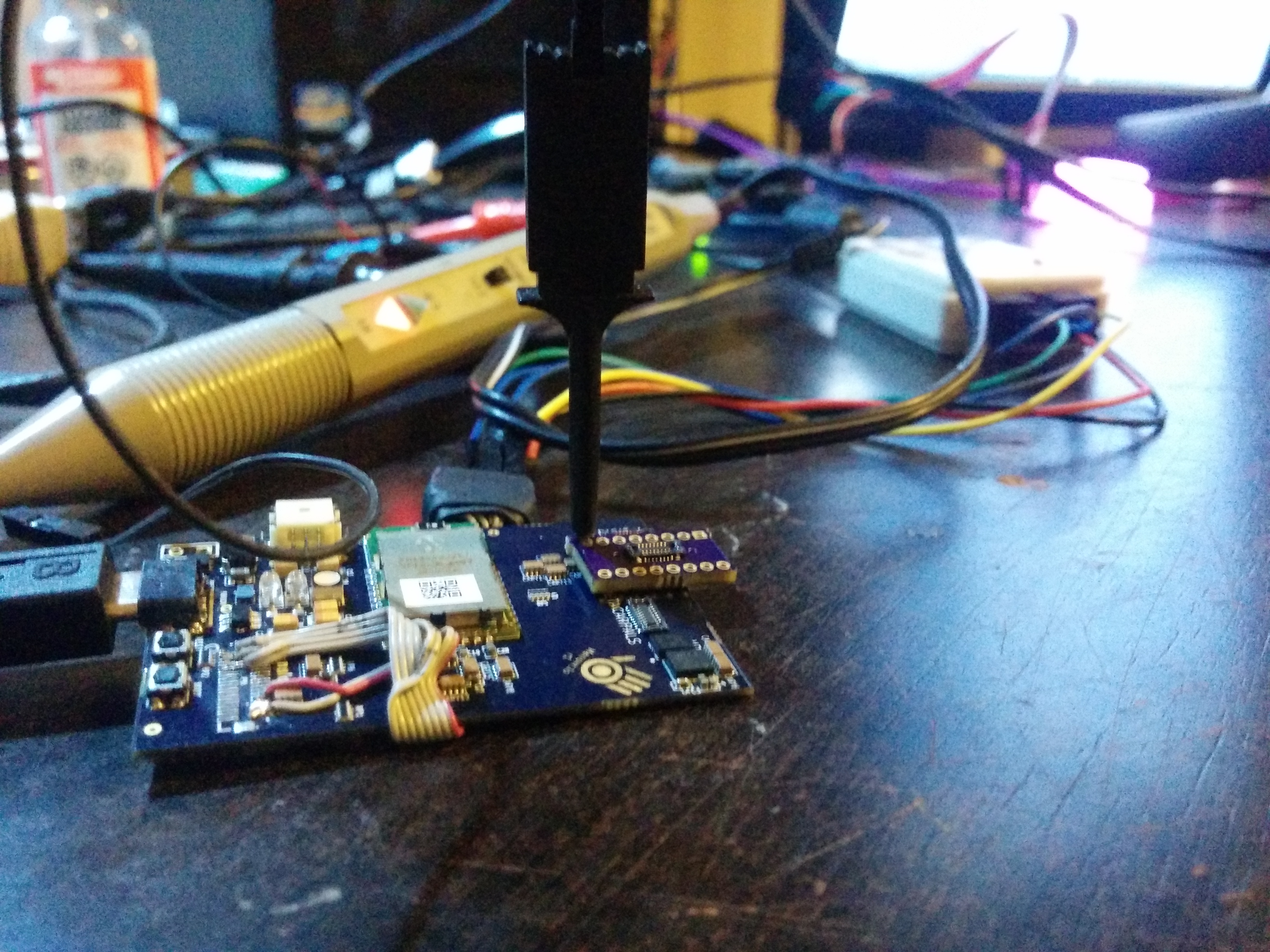 That's the r1 main board with no battery, plugged into USB, a logic probe, and the JTAG dongle for the CPLD. The small purple PCB on the right-hand edge is the debug harness for the digits.

This is the part of the dev-cycle where two complex systems meet on a strand of copper wire. Getting this piece right will take some more time. But once I've finished, I can give some real-world transfer-rate benchmarks.

I can now reliably address registers inside the CPLD, which now releases the bus as expected. Another few nights of testing before I move to make the firmware use the SPI hardware, rather than bit-banging the GPIO.

Validated: clock-enable logic for the internal registers. I can now set configuration registers.

Validated: IRQ selection logic works. I can set the CPLD wakeup IRQ to any specific IRQ signal. One of these was wired to the config register for testing. I can trigger the wakeup_isr by listening to the appropriate signal, and then setting that signal in the config register.

I better-pipelined some components of the transfer state-machine, and saved some CPLD complexity. As it turns out, much of my observed inconsistency was software-related, which is fixed.

Can't read from the main IMU yet...... But I think I know why. Operations are repeatable. But I still see a trailing bit in the IMU access. Fortunately, simulation shows the same thing.

I am now waiting on the USPTO to write me back and tell me what I screwed up.

But in all seriousness... it's a tremendous relief to be at this point.
How big a relief?

I started designing r1 about 13 months ago, and received the populated main-boards in October (8 months ago).

Arguably, the CPLD contains the majority of the complexity of this project. Once (if?) I publish its schematics, you won't have to take my word for it. We're talking about BGA100 parts on a 6-layer PCB with buried vias, and accounting for ~70% of the trace-length in the board, the odds of recovery from a mistake made here approach zero.

Even partial-failure of this subsystem would mean a basically useless main board, and (~$2600 + 2 months) blown on a moment's oversight.

For an engineer that touches the physical world, "invoking GCC" might cost more than he makes in six months. So when you meet someone who routinely codes for 10+ hours in C, and their code not only compiles the first time, but does exactly what they meant it to do, this is one possible explanation for how they got that way.

And when you fund a project on your own dime, there are only so many stupid small mistakes you can make before economics kills your project. Any given millimeter of trace might be the thing that vaporizes thousands-of-dollars and the possibility of timely market-entry.

So until I could (in)validate the CPLD, nothing more could be decided about the future. And nearly everything else must be built before this particular piece could be tested.

So after about one year of experimenting on a working r0, planning, designing, and finally porting firmware, I proved my hardest hardware lemma to myself. The CPLD works.

This is not to say validation is complete. But it has passed enough tests to convince me that the design goals articulated here will all be met (if they aren't already). Software is going to be much cleaner. Hell... the initial working ported code already is cleaner, despite being a sad assemblage of hackery.

I've never held the US patent system in high-esteem as-implemented. But until we have a blockchain-driven patent system that manages itself and pays inventors based on reference in open-source designs, the idea of purely-defensive patents will have to make-due. Provided my filing goes through, I will begin publishing full CPLD schematics and images alongside the firmware.

Hardware SPI is working for R/W of CPLD registers. Timer peripheral is also working to drive the CPLD's external clock. This marks the end of the bit-banged SPI.

Runs niiiiccce.
I will test the IMU access tomorrow.
All checked in.
PR'd. Merged. Sleep.
This version is going to be so awesome...

And there is the magnetometer!
0x68 and 0x3d are their WHO_AM_I bytes.
Commiting
Redbull

Now I have to figure out some SPI peripheral stuff to cut the 4 bytes of slack leading up to the data.

[3:39 PM] IRQ subsystem is validated. I am still fighting with spanned ops.
But I can read/write from IMUs now.
Just not read large swaths at once.
I think I have one more pipeline bug to work out...

[6:35 PM] CPLD fully validates. Have not yet tested the frequency limits.
But it will be high-enough, I'm sure.

Not all the bytes are shown, because I over-ran my terminal width. But they just repeat 0xff until the end because there are no digits attached.

All the 0xFF represent gaps in the sensor package.

Those are the double-buffer IRQ reads. I toggled a bit by writing the config register to simulate an IRQ signal changing. I have verified that this also works with all signals, and that the signals are being faithfully-imported from the digit interface.

I cut some critical slack that was causing quartus to optimize improperly. And that solved the last of the IRQ aggregator problems.

The protocol is one of simple framing.
No CRC/checksum.

I was able to save ~26 filpflops by cutting the two middle params down to 6-bit. Valid parameters can never exceed those bounds, and supporting them was a waste of precious area.

We still have 20 flipflops to spend. The CPLD has exactly enough space left over to count to 1 mibi. Which isn't that much.

Going to add some previously-stripped features, increment to CPLD r9, re-burn, validate, and then call it done.
Committing....

What I wouldn't have given to have these features in the prototype glove... This thing is going to kick so much ass... 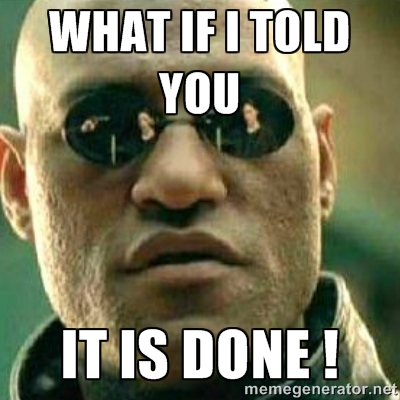 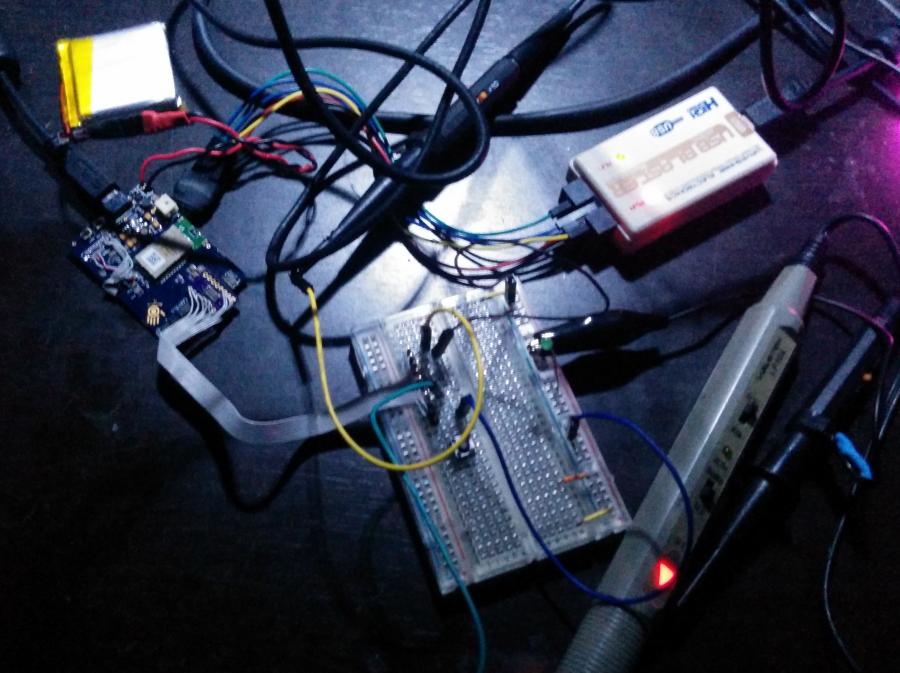 That's the main board with an attached battery on the left. JTAG pod, O-scope and logic probes hooked up to the breadboard on the right.

What follows is a post I wrote back in April for my co-workers who are tasked with sales and product concerns. I am posting it because it still applies to our present situation

This is the third post in a series of posts detailing the rationale for design choices in our motion capture glove. I will try and anticipate questions that informed users will ask. This